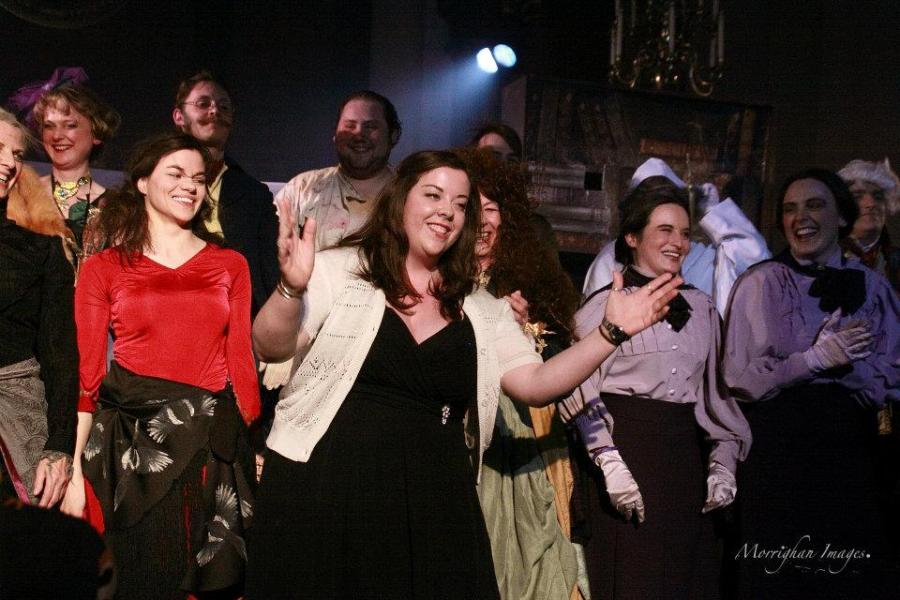 Our first production. They say go big or go home, and with this as our debut show we went really, really big. It was a massive undertaking. Developing the script from Mervyn Peake’s original book, working with a cast of twenty, and creating an elaborate set that worked around the venue’s existing features. It was a great challenge, we had an enormous amount of fun and made some great friends in the process, many of whom we went on to work with again.

“Director Ellie Pitkin has undoubtedly achieved a feat of excellence in her homage to Peake’s novel. This was a brave and wonderful new world” – London Festival Fringe

We’ve been working really hard on lots of funding applications to reboot our adaptation of ‘Gormenghast: Titus Groan’ – while we wait with our fingers crossed, here’s some lovely photos from the readthrough we had in Feb.

Here’s a little more info on that mammoth adaption we performed in 2012.

The Gormenghast series, or Titus books, written by artist, author and poet Mervyn Peake, are set in a timeless world with a rigid class structure, thousands of age old traditions, and one ambitious kitchen boy. Titus Groan tells the first part of the story; the birth of Gormenghast’s heir, the descent of the Earl into madness, and Steerpike; a kitchen boy determined to better himself at all costs and who by doing so shakes Gormenghast to its very core.

Mervyn Peake was a poet, illustrator, playwright and visionary creator of Gormenghast. He spent some years of his childhood in Tienstin, China – the world of which is very much present in Gormenghast. He went on to create innumerable illustrations, as well as writing wonderful poetry, novels and nonsense literature. Though he did not enjoy great success in his lifetime, he was well respected and admired by his peers. In more recent years, Peake’s work has received the recognition it deserves, and Blackshaw is proud to be a part of that.

“A somewhat dysphoric (though incredibly humorous) universe is painted in large swathes of theatrical colour from the moment one takes an actual pew. The Master of the Ritual unravels and drops an acme-sized scroll from balcony to floor and immediately we witness the sheer size and downright chutzpah that this production delivers all the way through.

They incorporate projection, mime, a very high level of physical theatre, impressively zany costuming and an incredible soundscape – both live and tinned An outstanding cast must be commended for carefully nurturing these characters into a cohesive circus of idiosyncrasies, all maintaining a sparkle of cartoon but never at the cost of anyone else. On that note, Director Ellie Pitkin has undoubtedly achieved a feat of excellence in her homage to Peake’s novel. This was a brave and wonderful new world for me, and it deserves a great deal of attention.” – London Festival Fringe

“the brilliant and resourceful use of the space…combined with atmospheric accompanying music ensured that my attention was soon entirely absorbed… the production hummed with energy, moving dextrously from the hilarity of satire to a real sense of a world and a family that is falling inexorably and tragically to pieces. Roll on part two of the Gormenghast trilogy!” **** FOUR STARS – Remote Goat

You can see production photos, behind the scenes snippets, and more, in our other blog posts.

Photos by Morrighan Images (Nivine Keating) as watermarked. Other images from cast and creatives.